Situated down an unassuming dirt laneway in Bloomfield, a janky old warehouse blends in seamlessly with its rustic country setting. But step inside and you’re in a thoroughly modern brewery—crisp white walls, black-on-black exposed beam ceilings, and a production floor meticulously designed by some of the best minds in the Ontario craft beer scene. 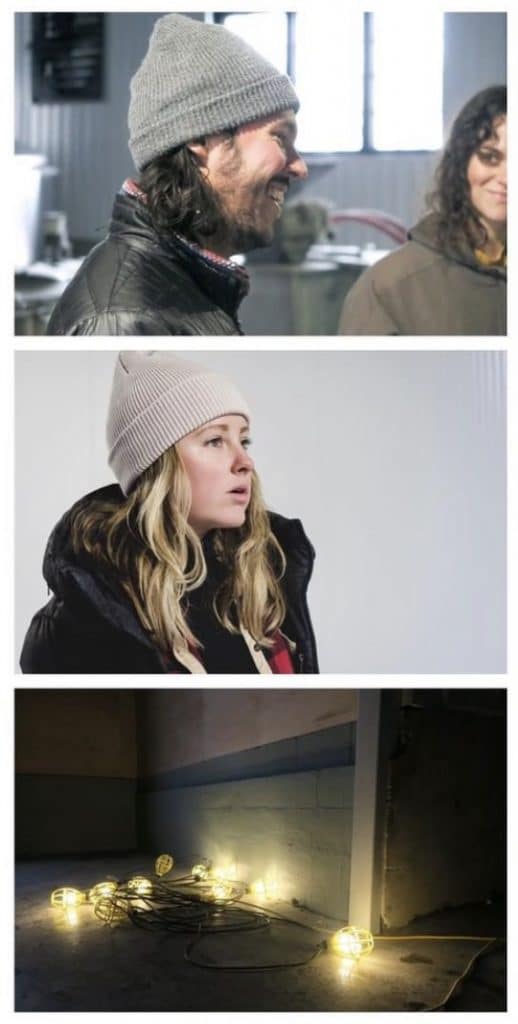 At the helm is Mallory Jones, the creative force that brought Kingston’s Stone City Ales to cult status. Her partner, Justin da Silva, worked alongside her for five years as Head Brewer, delivering funky, experimental ales that gained an established following of serious beer geeks. They’d toyed with the idea of starting a business together for years, and finally, last Spring, the time was right. With friend Jes Nettleton on board as Head of Sales and Exporting, the trio dove right in.

Over a number of weekend getaways, while the team was still at Stone City, they got a taste of County life and knew this was where they wanted to be. Hailing from the East Coast, Mal felt a certain familiarity in the PEC culture that reminded her of home. In May 2018, while Jes and Mal were vacationing, Justin got an excited call from their realtor. He said “You need to get down here right now.”

From the first visit, Justin was smitten with the property—a former glass blowing studio with loads of character set back from the main road in a picturesque field. The girls were on board and planning began. The team envisioned a fully functioning, modern brewery inside, while maintaining the warmth and character of the exterior—“The County appeal,” says Jes. “There’s history we don’t want to wipe away.”

Justin spent the past 10 years brewing around Ontario and consulted on the design of several breweries, including Stone City. The facilities at Matron are a culmination of his years of experience—learning what works and what doesn’t. A lot of the story is about infrastructure: drainage and cold storage space. The entire floor of the brewing area has been ripped up and retrofitted with massive trench drains, essential for managing the thousands of litres of hot liquid that need to be properly handled. A massive cold room was installed shortly before our visit, soon to be home to retail product and kegs for the onsite tasting room.

“I don’t think I’ve ever worked in a brewery where water actually flows into the drain. It’s not as glamorous as people think.” Justin says of the brewing process. “People have this vision, but you’re really just spraying stuff down and squeegeeing floors. It’s 90% cleaning and 10% brewing.”

Jes stresses the importance of taking the time to do it right the first time. The work they’re doing now should allow Matron to steadily grow over it’s first few years, without any costly emergency upgrades.

“We want to put in the investment now so we don’t have to reinvest to correct or expand infrastructure in 5 years.” She explains.

Jes is taking on sales and exporting for Matron, a natural extension of her experience as Regional Sales Manager for Burlington’s Nickel Brook Brewing Co. She’s hoping for a better work-life balance in the County—crushing it in the summer and slowing the pace in the winter.

Mal and Justin have been together since high school and have plenty of experience working side-by-side in their roles at Stone City in brand development and brewing, respectively. Mal’s background in graphic design and branding is evident in the strong aesthetic she’s created for Matron. The name itself was Justin’s idea, evocative of a strong, yet feminine figure—authoritative, but nurturing. Whether this speaks more to the product or the people is up to interpretation.

“The idea of caring for others, be that through beer and food, or a company caring for its employees, resonates with all of us coming from a hospitality background.” explains Justin. “It’s also important for us to care for and be responsible to the land we’re using to make our product.”

“Most consumers don’t have a connection to where their beer comes from, and we want to change that.”

A Sense of Place

The land itself was a huge factor in deciding to brew in the County. Locally grown hops and malt will be the basis for Matron’s Farmhouse Series, a saison and ale made from entirely local ingredients, including mineral-rich well water from the Matron property.

“Water is such a large component of beer,” says Justin, “it has a huge influence on what the beer tastes like. We’re lucky to have nice, clean tasting water here. We can use it as is, with some light filtration if necessary, but we really want to preserve the minerality. You can build your recipe around the water flavour profile and make really beautiful beer.”

The surrounding fields may someday be filled with fruit trees and other botanicals, supplying flavour and aromatic ingredients for the Farmhouse beers. But when it comes to the hops and the malt, the team agrees it should be left to the professionals.

“Edgar at Pleasant Valley Hops is so amazing at what he does, there would be no point in me trying to replicate his product,” says Justin.

“We also strongly believe in supporting local businesses, and these relationships with our suppliers are important to us,” adds Mal. “Barn Owl Malt in Stirling sources their malt from around the County. We can actually get PEC traceability on all of the product we get from them. Most consumers don’t have a connection to where their beer comes from, and we want to change that.”

Leaving the Brewpub Behind

The brewpub setting of Stone City meant a huge tap list with a wide range of beers to appease a variety of customers. The focus was on hop-forward American styles like Double IPAs and Imperial Stouts, with a lot of funky, experimental Belgian ales done as one-off brews or seasonal features. Matron is a chance for brewmaster Justin to hone his craft and focus on a small, consistent portfolio of beers done in classic Belgian and American styles.

The locally sourced Farmhouse Ale and Saison will be conditioned in Champagne-style bottles, aged on site to properly stabilize the diastatic yeast typical to the style. The resulting beers will be elegant, soft, and balanced with a strong connection to the place they were made.

There will also be a series of canned beers, simple and sessionable, perfect after a long day of beach-hopping or working in the brewery. Justin has won awards for his IPAs, and developed a unique style of his own over the years. Matron’s IPA will be delicate, flavourful, and aromatic, but light on the bitterness that can sometimes overpower hop forward ales.

He’s also come to love brewing Lagers, partly due to the necessary skill involved. Perhaps surprisingly, it’s the lighter styles of beer that are harder to perfect. It takes a lot of finesse to create a simple, crisp beer that has nothing to hide behind. Look for a dialled in, concise Lager from Matron.

Matron plans to open their cellar door this Spring, with a tap room for tasting and tables for guests to linger and enjoy a pint. In a space that’s been traditionally male dominated, Matron hopes to introduce something elegant, balanced, and feminine to the burgeoning County beer scene. Get excited about this and watch this space for updated tasting notes on their lineup.

The County Bachelorette: Where To Go/ What To Do/ How To Have Fun (+ Be Cool)