I’ve never satisfactorily been able to explain my lifelong affair with crumbling structures—the more decrepit, the better. I can’t resist ruins. Perhaps it’s the possibility of renewal or the lure of starting all over again. Or maybe I crave the melancholy realization that the hope of permanence can never be achieved. One thing is certain: I fall in love with the abandonment and declaration of neglect. Give me a rubble foundation and a tumbled framework and I will cheerfully spend years in their restoration. I wish there were a pill to make me stop.

“You are besotted with rust,” my brother Deo says, but he doesn’t understand that I don’t see rust, I see the beauty of decay, the mottled richness of wrinkled walls and crusted plaster.

“Ruins are enchanting,” I reply.

I suppose by now I ought to have figured out my obsession with these piles. Perhaps I’m trying to make a connection to the way we lived in the past and the lost wisdom of bygone days. And who can quarrel with a nostalgia for simpler living or less complicated times? A psychologist might suggest that I’ve been trying to discover a sense of belonging, searching for a place to put down roots, but that doesn’t explain the restlessness. Every time a project is finally complete and I find myself comfortably ensconced in my resurrected abode—I can’t wait to move on.

“You always feel you will come over the brow of the next hill,” Deo diagnosed, “and there it will be, a vista you have never seen before.”

He could be right. It all started when I was a student in Europe. Between courses, I’d spend all my time buried in the real estate ads of the Times. In my years at the London School of Economics, I rented two homes and improved them as much as my graduate finances would support. The first was a single-storey retreat, built by an eccentric teacher of literature at the Cheltenham Ladies College. Perched on a cliff high above the Welsh town of Tenby, ‘The Clovers’ offered a magnificent panorama over Carmarthen Bay and the Bristol Channel. Ms. Allen had carved out a natural amphitheatre at the edge of the precipice and erected a Temple to the Winds to stage her Greek tragedies. ‘The Clovers’ was an astonishing piece of modernist architecture that had been empty since her death years earlier.

The second property was South End House, a crumbling Victorian red brick estate just outside the village of Bungay in Norfolk. It too had been mothballed for years and was in desperate need of attention. Though I was a tenant, I devoted far more time rehabilitating these wrecks then to my studies. These were the early symptoms of a lifelong condition.

ORD. Obsessive Ruins Disorder, a neurosis not yet classified in the Diagnostic and Statistical Manual of Mental Disorders. By the time I returned to Canada to begin a career in trade negotiations in Ottawa, the sickness had taken firm hold. For the next twenty years, when I wasn’t working on tariff reductions, my life revolved around the restoration of old structures. I bought, rebuilt and sold twelve houses while I was living in Ottawa.

Some of my homes were quarters in Lower Town for labourers working on the Parliament buildings, a few were enlarged cottages in New Edinburgh and Rockcliffe Park, and at least one, like the Francis Sullivan House, represented an important piece of architectural history. Each one I rehabilitated, each was my residence where I intended to stay and make a home, filled with the patina of age and artefacts of my life and career. And every one was a love affair, with the highs and lows, the crises and drama of any intense relationship. I didn’t leave easily or without regret, but each time, leaving traces of myself behind, I bolted for a new lover.

Next, I discovered Lunenburg, Nova Scotia, and a new cycle of romances. First, I refurbished the Miller House to its 1790 footprint, adding plumbing, heating, and a kitchen. Next was the Kaulbach House, a much grander Georgian home, it too was returned to its 1810 elegance, including the reconstruction of eight third floor dormers and four fireplaces from the ground up.

I became attached to the Loyalist style in buildings and the English sense of balance and harmony. I followed their trail of settlement in Canada as the Loyalists fled the American War of Independence to pledge their allegiance to King George III of England. And then I discovered Prince Edward County—the motherlode of crumbling houses. Everywhere I looked, there was a footprint, a foundation, or tumbled buildings. It seemed that ruins, piles, and collapsed boundaries were the signature sightlines of the island community. The pile I bought in Prince Edward County was a former Loyalist farm at the water’s edge with an assortment of barns, sheds and foundations already surrendered to the forest. 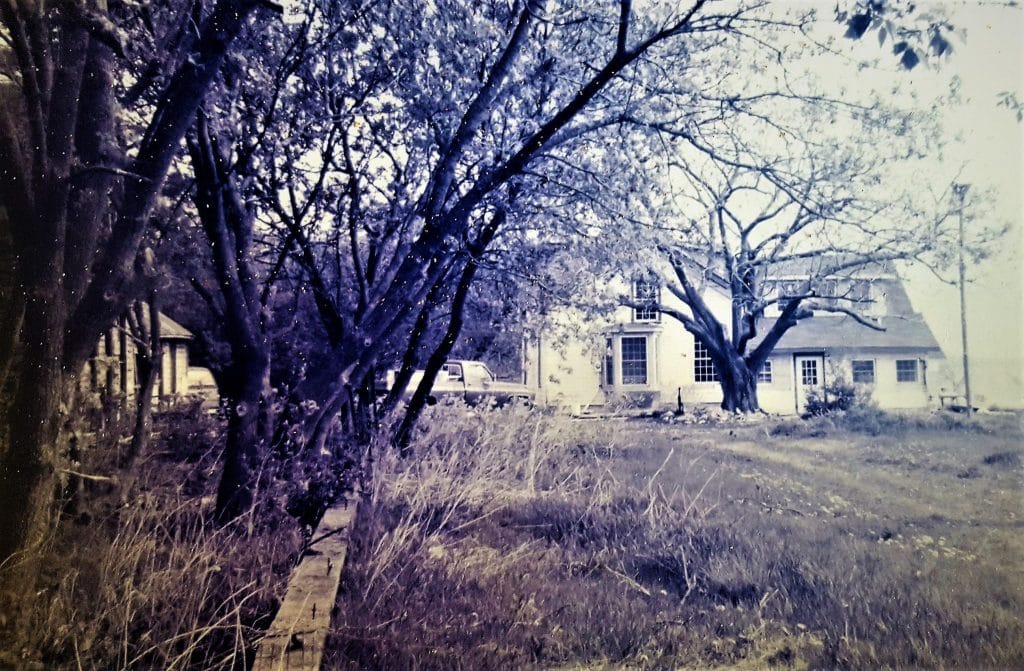 Cressy House is now a compound of fully restored Loyalist buildings with rows of dry stone walls and cedar rail fences. A pig barn connecting to a drive-shed serves as a Guesthouse, while the gabled main house extends to a library and a wisteria covered loggia. There is a stone chai to store the wine barrels for a vineyard of chardonnay next to a field of lavender. With an undiluted view across the open expanse of Lake Ontario, Cressy House is more reminiscent of the south of France than the Canadian heartland.

This was my last project and I’m pondering the next, but something is different. The County is home. Everything fits together here—the feel of the air, the lay of the land, the colour of the horizon. The heart knows it belongs, the yearning is quieted and here, finally, there is the possibility of peace, perfect peace.

Main Photo credit: Cressy House/Daniel Vaughan, 2018 — Cressy House is currently the beautiful getaway home of Chef and Restaurateur, Grant Van Gameren and his family. They rent it out throughout the year and the lucky visitors can even request a meal prepared by GVG himself.