I’d overheard a lot of County love for Ryan Monkman over the past several months. At Keint-he Winery, “Are those Ryan’s cider barrels? He’s so lovely, I can’t wait to taste this stuff….” Then, “Have you tried Ryan’s cider? You have to!” at Bloomfield Public House. And finally, “You haven’t met Ryan yet??” directed towards me, at which point, I thought I’d better.

First off, there are three things you need to know about Ryan’s cider: It’s not the non-alcoholic, fresh-squeezed stuff you enjoyed cold or hot as a kid. And it’s not the stuff you buy a six-pack of at the LCBO. And finally, while his cidermaking process resembles that of winemaking, Fieldbird is totally not apple wine. Now, neither Ryan, nor his cider are snobs, but—if you want to get what’s going on at Fieldbird—you need the heads up that you’re about to taste something quite different and very exciting. 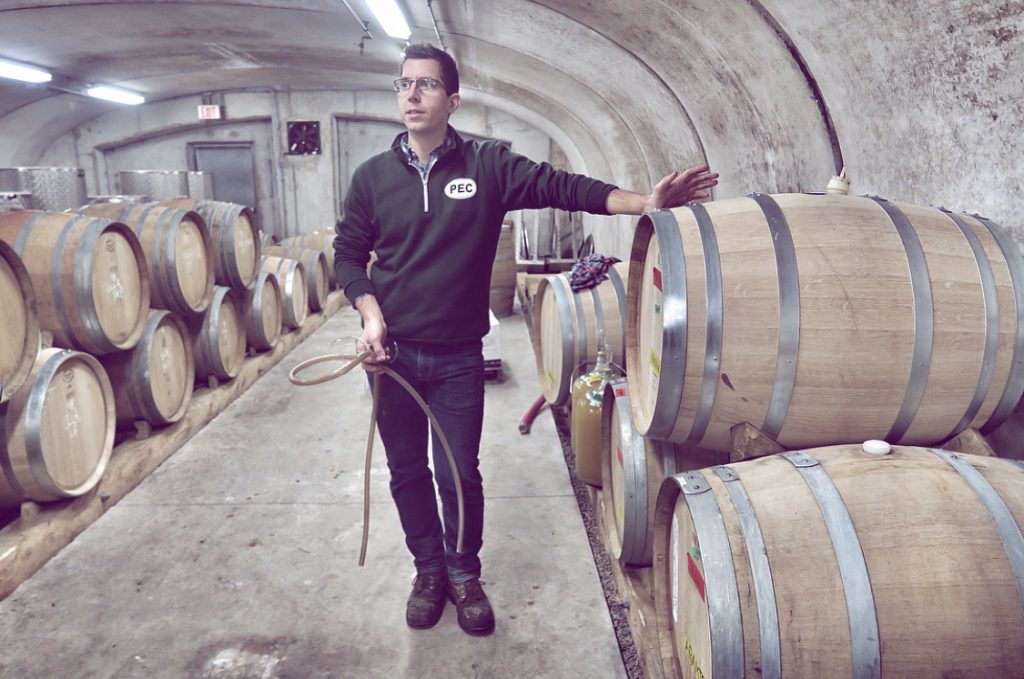 Today, we’re hanging out at Keint-he Winery, the current retail point for Fieldbird Cider and the place where Ryan’s barrels lie snugly along the whole west wall of the cellar. Educated in both theology and wine, he is bright, sparkly-eyed and captivating. Ryan’s mind runs fast and he flips from topic to subtopic and back, tangentially and joyfully. His passion for cidermaking is equal parts evident and compelling.

He gives us the tour, turning on some tunes as we reach the cellar, and I imagine that these barrels are treated to a number of loving touches—from music to lively conversation. We taste the beautiful ciders in mid-production. The offering is diverse and it’s obvious that Ryan is an educated experimenter, with plans to methodically tap the wisdom and legend of the ancient apple.

Alongside the already delicious ciders for next season, a barrel of pear juice (nicknamed ‘Ria’ as part of a naming system that includes Bertha and Bessie, d’Artagnan, Nadia, Wilma, and Jo—this year’s crop of ladies) was poured into our glasses—a creamy and subtly sweet confection with subdued pear flavour. There are two barrels of this nectar in total and a chance that the final version will include one still and one sparkling.

Another experiment is the 2017 ice cider, a deep amber hue with complex, nutty aromas that we imagine would pair beautifully with a chunk of old, salty Parmigiano Reggiano. It looks like there’s some delicious stuff coming down the pipeline at Fieldbird, but for now, we head upstairs to chat some more and taste the final product.

Why cider and not wine?

“I drink both. I love wine. I love cider. I love beer and gin and whiskey. I don’t care much for vodka, but I like people who do. Three large pulls got me into cider.

The first, Nicole and I are starting a biodynamic farm. We want sheep to run through a full orchard of massive trees. Those trees need to grow something…

Two, I love working with barrels. There’s so much beauty and history wrapped into each one. I’ve struggled with mental health for years. I feel better on the days I work with barrels. I think it makes me a better husband and father to have such joy at work. There’s something sacramental about it, but I can’t describe what.

Tell us more about the barrels.

“Working with barrels takes a lot of work. Barrels are not exact replicas of one another. Each has quirks and nuances and personality. They ferment different apples in different ways. Some like being warm, some like being cold. They give different flavours and age at different rates. They get cleaned at different times. They’re from different years and different forests and different coopers. It’s all too much to keep in my head, so I need to write it down. Most wineries use a numerical system to track barrels; like an ID code. I think that strips my favourite part of working with oak; the personalities.

So to keep track of our barrels, I’ve named them. Some names have deep meaning, some names are just for fun. It makes my log more interesting: “Jo smells funky. Washed Aramis. Love Ria’s nose.”

I have a barrel made by Pete Bradford named Pete. I have a barrel named after a Broadway singer I had a crush on when I was fifteen. We’re about forty names deep right now, so sometimes the names seem to come from nowhere (Thom and Jerry?).

My favourite part of naming the barrels is wishing them good night. The days during Harvests are long. It’s a lot of time alone in the cellar – just me and the barrels. When it’s eventually time for me to go home, it feels right to wish them good night. It started a few year ago as a joke when I turned off the lights. Eventually I realized no one was around to listen to the joke. I was doing it for the barrels.

Now that they’re named, I can walk through the cellar at the end of a long day. I can wish each one good night by name. When I come in the next day I can greet them too. That’s my favourite part.”

How does a serious cider drinking person approach real cider?

“I think all cider is “real” cider. We make one type of cider, but it’s not the only authentic one out there. There’s a farm outside of Guelph I love. It’s called Heartwood. They have pigs and cows. The animals have room to run and play and frolic. They grow all kinds of food too; berries, rhubarb, vegetables. In the spring they harvest maple trees to make syrup. There’s a warm farmhouse tucked in a small woodland. In the farmhouse is a big table covered in fresh food—good food. Food soaked in love.

They make cider at Heartwood. They flavour a lot of their cider with fruit they grow. They sweeten some of their ciders with maple syrup from the trees surrounding their home. It’s a wholly different style of cider than we make, but it’s delicious. Authentic and real.

Our ciders are mostly still (without bubbles). My best suggestion is for people to approach them like light red wine. Drink from a glass you can swirl in. Have it bit chilled, but not ice cold. Take a moment to smell the bouquet. Then throw it back.

As for food, pair it with something with lots of butter. As much butter as you can manage. Roasted chicken with a butter enema, cod poached in butter, butter fried butter…you get the picture.”

“Drink cider like a Pinot Gris or Chardonnay. At first, you’re looking for the bouquet or nose, but the real test is on the mid-palate, which detects the fullness. Most ciders have a really long front and tail, but no mid-palate, so they make up for it with bubbles.”

What’s it like running a fledgling business with a newborn?

She’s also the best mom I know. Our kids are amazing; full of love and hope and optimism. None of that comes from me. It’s all Nicole.

It’s all Nicole. It’s always been Nicole. I hope it always will be.”

I am the target text.

This is not your typical canned sparkling cider. Closer to an on trend Pét-Nat wine, the bottle gushes when opened and looks like it’s going to have some serious funk on it. The mousse dissipates quickly in the glass but there’s a stream of persistent bubbles rising up through the nearly opaque haze.  Despite appearances the nose is pure fruit, with notes of pear, banana, pineapple, and a touch of cream. There’s beautiful frothy texture on the palate, tart acidity, and fresh apple flavour. Don’t let the “Feeble” fool you, this is a celebratory, electric cider. (Tasted 11.10.18)

A single varietal still cider from 100% County Northern Spy apples. Beautifully perfumed nose of apple pie filling and nectarine that evolves the longer it sits in the glass. It’s slightly off dry, balanced with crisp acidity. The palate is bright with a hint of tropical fruit and a lighter body. The freshness of this cider would make an excellent aperitif, or paired with delicate flavours like raw scallops on the half shell or ceviche. Try this if you love crisp, unoaked whites like New World Pinot Gris. (Tasted 11.10.18)

This blend of mostly locally grown Golden Russet apples has a warmly spiced nose of clove and star anise with a burst of tropical fruit. It’s completely dry on the palate with excellent structure and a long finish. There’s a milder acid profile than expected, contributing to a creamy mouthfeel and lush texture. The spice flavours follow through from the nose, along with some autolytic character from extended oak ageing. Pair with rich seafood dishes, like fish in a lemon butter sauce. Try this if you love full bodied whites, like white Burgundy. (Tasted 11.10.18)

Experimental apple varieties were used in this cider, along with Ambrosia and Northern Spy. The nose is bursting with ripe apple and pear, with something warm and comforting underneath the crisp fruit aromatics. It’s off dry, with great texture and balance. There’s juicy fruit on the palate that lingers on the finish. This cider is very approachable, with a lot of versatility for food pairings. Excellent for sipping on its own, or pair with warmly spiced dishes like Madras curry and Caribbean jerk chicken. Try this if you love aromatic whites like Vouvray and Riesling. (Tasted 11.10.18)

Kirstyn Mayers’ passion for wine started in 2007 when she joined Norman Hardie Winery. The only employee of the fledgling winery, she quickly became immersed in all aspects of the business. Over the next six years she helped out in the cellar, learned to cook alongside some of the amazing chefs that frequented the winery on their days off, and tasted a lot of really great wine with a lot of really knowledgeable people. Rounding out her informal tasting education with classes through the Canadian Association of Professional Sommeliers and an Advanced Certification from the Wine and Spirit Education Guild, Kirstyn shares her continued wine adventures in Prince Edward County as Au Lait Magazine’s wine columnist.

Who Run The World? Ducks: Geoff Heinricks Dishes The Dirt On Duck Eggs—From ‘How-To’ to ‘Know-How’