“Women” are a total buzzword these days, right? We’re a popular theme, distinct from what we do or who we are. Yes, we still have to compete on an uneven playing field (frequently for less recognition and pay), but sometimes it feels like we’re being paid in lip-service or leveraged as a party topic instead of being judged and rewarded for our very real and many accomplishments. When I asked Trail Estates’ Winemaker Mackenzie Brisbois about it last winter, she nailed the conundrum, saying “It’s amazing so many women are killing it in the wine industry today. I’m proud of making wine in an industry that’s been very male dominated and I’m proud of making wine and doing it while pregnant and while breastfeeding, but I’d love it if I were referred to as a great winemaker rather than a woman winemaker—being female isn’t my defining characteristic as a winemaker.”

But so many extraordinary County women have made a loud and resounding and delicious mark on the wine industry that we thought recognition and thanks were in order—so that was the focus of our 2020 Cellar Salon launch (and an unprecedented number of attendees came out to deliver their gratitude in person.)

Hosted by Duarte Da Silva, (Exec Direc of PECWA) who put forward the theme, chose some wonderful wines, and was an awesome guide through the tasting, we were also thrilled to be joined by Mackenzie (with fresh baby in tow) as well as the amazing Maggie Granger from The Grange Winery, Bev Carnahan, the force behind The All Canadian Wine Championships and Uncorked Canada, and a number of other female wine-stars (and tonnes of great fellas not looking for points.) It was a very wild and wonderful night and one we hope will set the tone for a year of great salons together.

Astrid on Women In Wine

“Women have long been a pivotal force in the wine industry. From the earliest days of winemaking through to the present day, women have left their mark, whether through thought leadership, advancement of trends, or by keeping tradition alive. Whether we’re talking about Prince Edward County or other notable wine regions of the world, women are breaking down barriers and they’re certainly not waiting for a seat at the table. With this lineup, we offer a cross-section of made-by-women, influenced by women, and owned by women wines from across the County and around the globe. Cheers!” 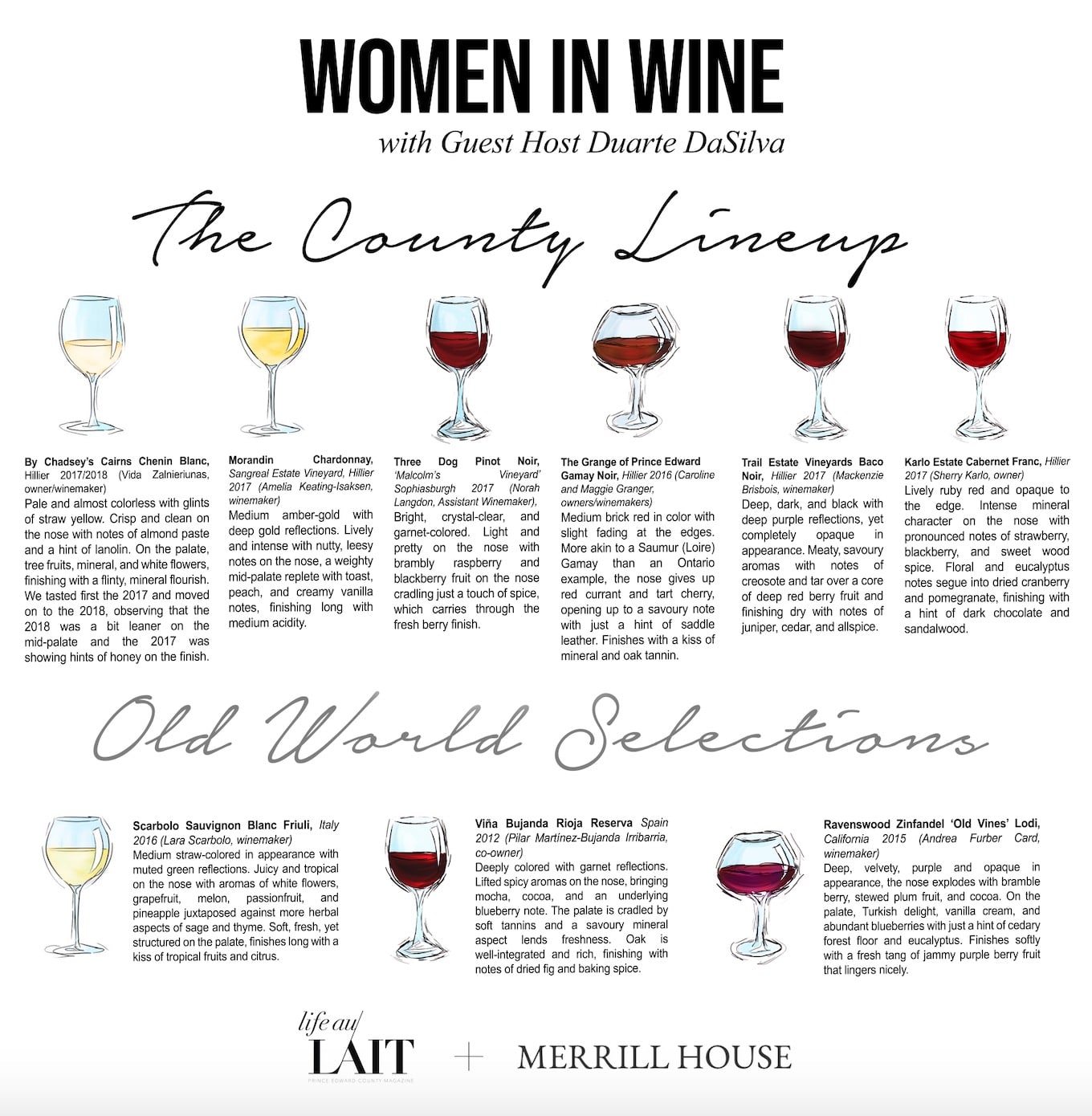 There some really great wine on this list and a LOT of tasters this week, but the most circled wine on the page was from one of my absolute top fave County wineries, so I couldn’t be more in agreement with Morandin’s 2017 Chardonnay a silver medal winner at the National Wine Awards of Canada. And when it came to the Elsewhere wines, we were torn between the Scarbolo Sauvignon Blanc Friuli and the Viña Bujanda Rioja. Both lovely and surprising wines. 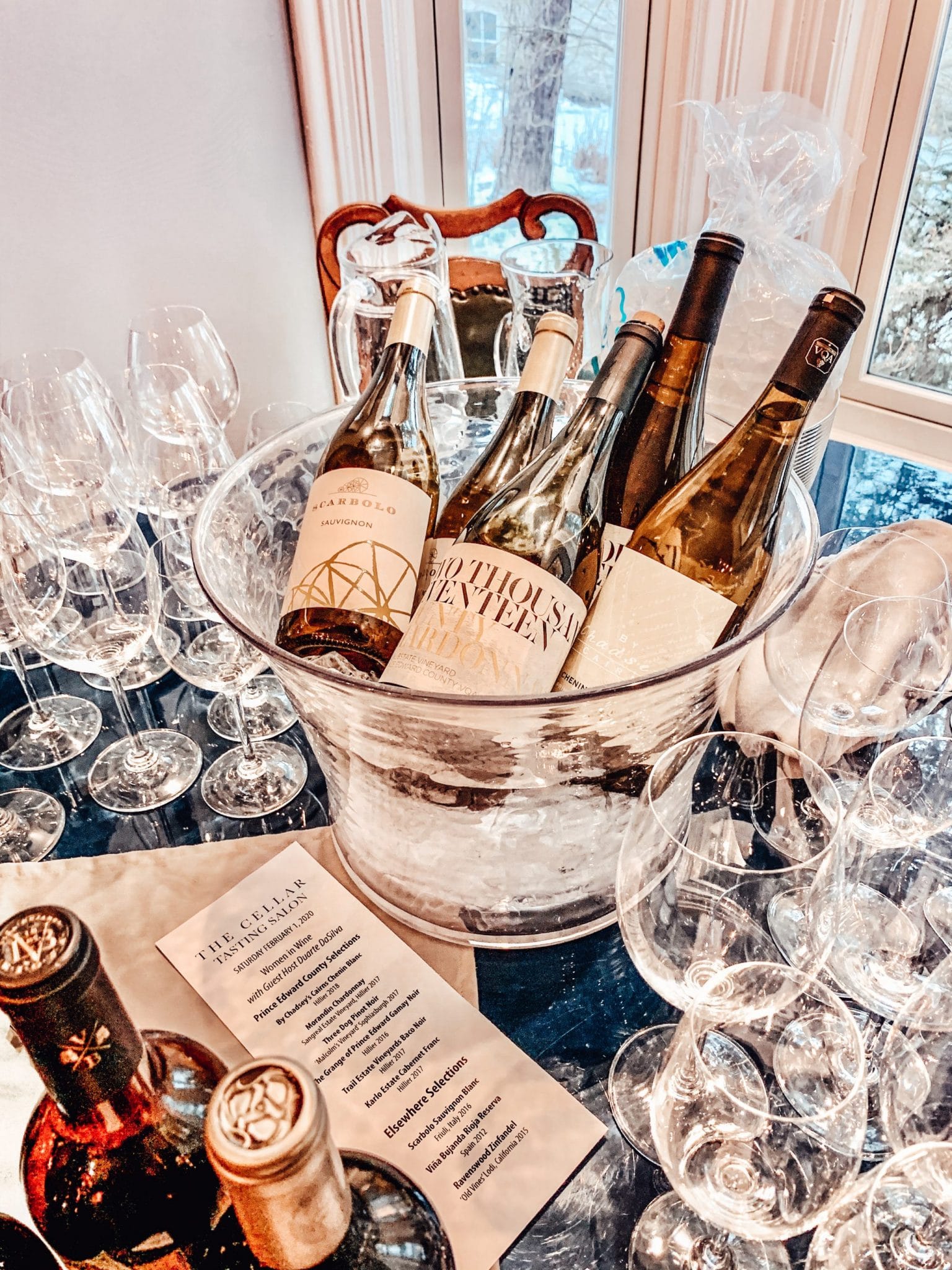 Pale and almost colorless with glints of straw yellow. Crisp and clean on the nose with notes of almond paste and a hint of lanolin. On the palate, tree fruits, mineral, and white flowers, finishing with a flinty, mineral flourish. We tasted first the 2017 and moved on to the 2018, observing that the 2018 was a bit leaner on the mid-palate and the 2017 was showing hints of honey on the finish.

Bright, crystal-clear, and garnet-colored. Light and pretty on the nose with brambly raspberry and blackberry fruit on the nose cradling just a touch of spice, which carries through the fresh berry finish.

Medium brick red in color with slight fading at the edges. More akin to a Saumur (Loire) Gamay than an Ontario example, the nose gives up red currant and tart cherry, opening up to a savoury note with just a hint of saddle leather. Finishes with a kiss of mineral and oak tannin.

Deep, dark, and black with deep purple reflections, yet completely opaque in appearance. Meaty, savoury aromas with notes of creosote and tar over a core of deep red berry fruit and finishing dry with notes of juniper, cedar, and allspice.

Lively ruby red and opaque to the edge. Intense mineral character on the nose with pronounced notes of strawberry, blackberry, and sweet wood spice. Floral and eucalyptus notes segue into dried cranberry and pomegranate, finishing with a hint of dark chocolate and sandalwood.

Medium straw-colored in appearance with muted green reflections. Juicy and tropical on the nose with aromas of white flowers, grapefruit, melon, passionfruit, and pineapple juxtaposed against more herbal aspects of sage and thyme. Soft, fresh, yet structured on the palate, finishes long with a kiss of tropical fruits and citrus.

Deeply colored with garnet reflections. Lifted spicy aromas on the nose, bringing mocha, cocoa, and an underlying blueberry note. The palate is cradled by soft tannins and a savoury mineral aspect lends freshness. Oak is well-integrated and rich, finishing with notes of dried fig and baking spice.

Deep, velvety, purple and opaque in appearance, the nose explodes with bramble berry, stewed plum fruit, and cocoa. On the palate, Turkish delight, vanilla cream, and abundant blueberries with just a hint of cedary forest floor and eucalyptus. Finishes softly with a fresh tang of jammy purple berry fruit that lingers nicely.

The Cellar Salon | Wine From Off The Beaten Path—feat. Kirstyn Mayers

The Cellar Salon | ‘The Big Reds’—Can The County Deliver?

The Cellar Salon | #COUNTYLOVE, The Wines That Make Us Swoon